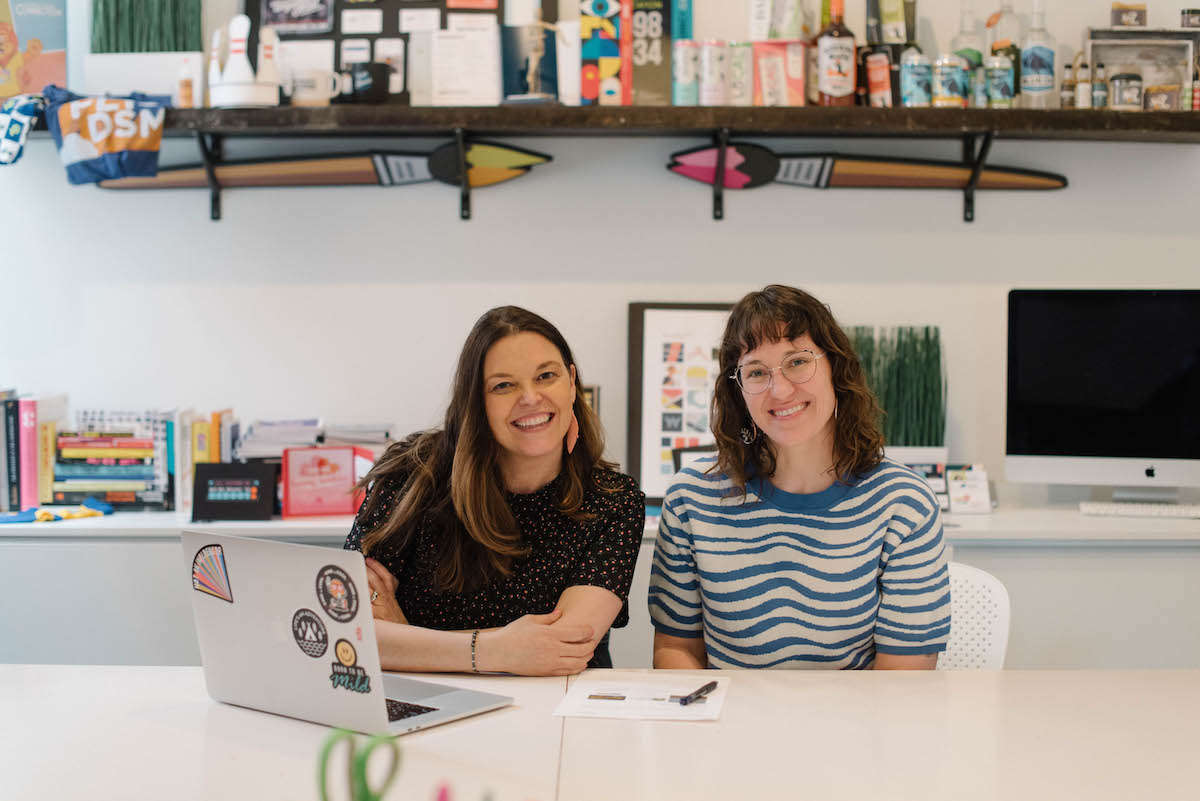 p7: How It Started vs. How It’s Going (5th Anniversary Edition!)

What happens when an extraordinarily kind-hearted girl from South Africa meets a crafty creative with an entrepreneurial heart? Well, at first, not that much. They become coworkers and then fast friends. They change jobs and pursue their passion projects independently, but they stay connected. And when their paths cross again…magic! The origin story of Project7 Design is full of twists and turns and pure serendipity. Many of you have probably heard some version of this story, but we’re digging a little bit deeper in honor of p7’s fifth anniversary.

Bridget Drendel and Kat Hutchison started life thousands of miles apart, but both began honing their entrepreneurial skills before they were even in middle school. Bridget grew up in South Africa and by third grade, she was the owner of a burgeoning clown business. She and several friends dressed up and provided entertainment at birthday parties and they were so popular they were booked a full year out. Her dad worked in advertising, and when he saw that she had an interest in design, he invited her to catalog photoshoots. “On Saturdays, I would drive around with him to watch billboard installs,” she says. “It was the coolest thing.”

Kat grew up in Dubuque, Iowa, and at the tender age of 10, she created a mail order form that she sent to friends. The sheet listed all of the crafty things Kat could make (for a price, of course), and her biggest sale was to her best friend, who mailed back $2.50 in an envelope for laminated bookmarks and other craftiness. In high school, Kat took an art class, which she fondly describes as “listening to music and playing around in Photoshop.” This unstructured exploration time kindled Kat’s love for design and she decided to move to Des Moines to study design at Drake University.

Both attended college for graphic design and during an internship her sophomore year, Kat met Bridget at a design firm. Bridget had recently moved to Des Moines with a degree from Columbia College in Chicago and five years of work experience under her belt. Their connection was immediate and remained strong even as they both explored other opportunities. They found each other again while adjunct teaching at Des Moines Area Community College and began meeting up to noodle over freelance projects. Eventually, both left their jobs to teach and do freelance. They set up an unofficial office at Java Joe’s and it all just snowballed from there.

Now that we have the backstory down, let’s get down to what the people really want to know.

Where did the name p7 come from?
Bridget had been using the name Project7 Design for her own freelance business, and when they tried to come up with another name, nothing stuck. So they opted to keep lucky number 7.

What was the first real project?
The company was officially born when Bridget and Kat responded to an RFP for magazine design. They got the project and realized they needed to rent a printer. But you can’t rent a printer without an office location, so they found a little spot in Beaverdale that was halfway between both of their houses. Shortly after they rented the space, they hired their first full-time designer and things really took off.

What’s the p7 office like?
About a year after they moved into their first office, they realized they needed more space. One day, Bridget was meeting with a client in the East Village and saw a For Rent sign in the window of a cute little building on East Third Street. She called the number and they moved in a couple months later. The East Village office feels like home, with brightly painted walls, an occasional cat or dog visitor, and a life-sized cut-out of Harry Styles, an office fave.

Last year, the team painted the iconic “Kind is Cool” mural on the north side of the building, creating an epic photo op for visiting Instagrammers and senior portraits. There’s also a full-sized fridge stocked with LaCroix and Babybel cheese, and, of course, a printer.

Who came up with “Do Good Things?”
Like so many p7 details, “Do Good Things” became the business mantra kind of on accident. While they were in the Beaverdale office location, the Beaverdale Fall Festival organizers asked Kat and Bridget to be in the festival parade. Bridget’s kids were stoked so it was an easy yes, but then there was the question of what to hand out/do/be in the parade. They printed a huge banner with the words “Do Good Things,” and a mantra was born. Four years later, they trademarked it!

But it’s way more than just a tagline or a saying on a t-shirt. It’s a way of life for Bridget and Kat, and, by extension, their business. “It’s just who we are,” says Kat. “That idea is so true to both of us as individuals that it seems effortless to do it in our business as well.” From volunteering to pro bono clients to supporting other small businesses, the p7 team spends a lot of hours each week doing good things. And that kindness isn’t just saved up for clients.

“P7 is such a unique place,” says Bridget. “We are really a family and we love each other so much. Everyone on our team is about helping each other rise.”

What’s next for p7?
If Bridget and Kat have some kind of secret plan for world domination, they’re not talking. They aren’t too stressed about what’s next—for now, there are amazing clients, excellent coworkers, and more than enough work to stay out of trouble. But they are seeing a trend in the work that they’re saying yes to. “Right now, lots of our projects seem to be leaning toward the things that matter most to us,” says Bridget. And what matters to p7’s founders is the mantra brought to life: doing good things.

“What’s so cool about marketing and design is that you can give back with your time and talents in an impactful way,” says Kat. “Just the reality that we get to do our best work on campaigns for a really good cause—what a dream!”

If you’re ready to do good things but could use a little bit of help getting your ducks in a row, we’d love to chat with you! Drop us a line or give us a call to start the conversation.

Christine Mueri is Project7 Design’s Senior Writer. She is a lifelong learner and really loves school, with a B.A. from Macalester College, an M.A. from Ohio State University (though she is emphatically NOT a Buckeye), and a Ph.D. from Case Western Reserve University.
MEET CHRISTINE…